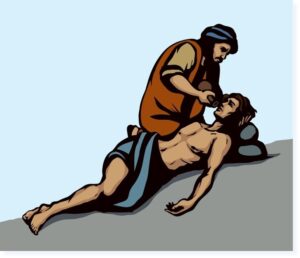 A Sunday school teacher was carefully explaining the story of Elijah, the Prophet, and the false prophets of Baal.  She explained how Elijah built an altar, put wood on it, cut a steer into pieces and laid it upon the altar.

Then Elijah commanded the people to fill four barrels of water and to pour it all over the altar and the steer.

“Now,” asked the teacher,  “Can anyone tell me why the Lord would have told Elijah to pour water over the steer on the altar?”

A little girl in the back of the room raised her hand and said,  “To make the gravy!”

Commandments!   That’s the starting point of today’s scripture readings.   What are they and why are they necessary?    For one, the Lord doesn’t want us to think of commandments and laws as ways to control us.  Rather, the Lord wants us to view the commandments given to us by God as a sort of user’s manual that help us to boldly express our love of God and neighbor in concrete terms, in ways that will really help ourselves and others to become all that God has created us to be!   In this way, the commandments become the means through which we can draw closer to loving God and neighbor and become holier, in the process.   All commandments are based on love because “God is love and all who live in love live in God and God lives in them.”(1 John 4:16)  So by following the commandments, we are immersing ourselves in an experience of God’s love for us and allowing that love to pour forth, in a special way, into the lives of those who’ve been marginalized, isolated, or discounted in some way.

One interesting biblical fact that’s worth remembering, is that the command to love our neighbor is repeated twice in the Jewish scriptures, whereas the command to love the stranger, the widow, and the orphan is repeated at least 36 times?!   (xv)  This fact can help us to interpret the reasons Jesus presents today’s gospel story to his followers.

The best place to start this reflection is by exploring the motivation to the lawyer’s question to Jesus,  “Who is my neighbor?”  (Lk 10: 29b) and Jesus’ ensuing response to the lawyer.  We must acknowledge that in the Ancient Near East, there were three concentric rings of affiliation:  your neighbor, your non-neighbor, and your enemy.    For the various groups that were in existence in the Ancient Near East, the neighbor was the one who was near —by blood, land, language, way of life, and worship.   (pg 44)  The non-neighbor was one who was not hostile to you, but one whom you did not wish any harm and with whom you didn’t share many aspects of daily living.   The enemy, on the other hand,  was one who was hostile toward you and who did not seek your well-being.

So, when the lawyer asks Jesus to define who is his neighbor,  it’s actually a self-interested question, one aimed at ascertaining what the minimum requirements were for adhering to the law and to specifically define who were in the in-groups and who were the out-groups in a given situation.  It was, in effect, asking Jesus,  “How much can I get away with and still be on God’s good side?” or, put another way, “Who are the people I’m less obligated or not obligated to help at all?”

To answer this question, Jesus uses a story of a predicament involving a man left half dead on the side of the road, and that man’s encounter with three different types of people:  a priest, a Levite, and a Samaritan.   In Jesus’ day, all who heard this story would have understood that the Levite and the priest had a religious duty to love one’s neighbor, which makes their action of moving farther away from the victim, all the more scandalous.   And while some may have excused the priest’s and the Levite’s refusal to help the man as justified because of the risk of defilement and the seven days that they would have to undergo to be purified,

as well as the  seven days of lost wages,  such an excuse overlooks the fact that the Mishnah explicitly allowed for exceptions from the purity laws, in matter of life and death.

In fact, all who heard this story at the time of Jesus would have understood that the Samaritans adhered the same legal traditions as the Levites and priests and so, could have made the same valid excuses for looking the other way.

This story of neighborliness is made even more shocking to the hearers because the Samaritans were considered the enemies of the Jews and yet, it’s the Samaritan who acts in love toward his designated enemy.  As another slap in the face, the Samaritan, most likely, was a merchant coming back from Jerusalem, the city of the Jewish Temple!   And while he himself could have been easy prey for ambush on his return to Jericho by roadside robbers, the Samaritan doesn’t consider his own well-being in the equation, but rather, stops to help the man left half dead on the side of the road, as a true neighbor would!

By this simple story, Jesus destroys the categories of neighbor, non-neighbor and enemy!   He classifies all people as our neighbor!  He classifies all people as worthy of our respect, time and attention!  He encourages us all to actively seek out such encounters in our daily living, too, as expressions of our love of God.  Indeed, such encounters, like the one recorded in our gospel, can, in fact, become sacramental by allowing us to become visible signs of God’s invisible grace, living and acting in and through us.

Toward the end of the story, when the lawyer responds that the neighbor in the story is the Samaritan who showed the half-dead man mercy, Jesus instructs him, “Go and do likewise.”  In this way, Jesus changes the lawyer’s question to, “How neighborly am I?”  and teaches us that we are a neighbor to the extent that we act with mercy towards others.

Jesus brings this home when, in Luke 10: 33, we hear that the Samaritan sees the plight of the man and is “moved with pity.”  In the Greek, the word ‘pity’ used here by Luke, actually translates as having “a gut-wrenching reaction, to be motivated from the depths of one’s bowels.” (pg 53)   The Samaritan therefore had a gut wrenching reaction that prompted him to see in a new way, to feel in a new way, to act in a new way, to cut through the socially constructed barriers and excuses others had erected, in order to reach out in love toward a fellow human being.  Theologian Gustavo Gutierrez remarks that  “our neighbor is not the one whom I find on my path, but rather, the one in whose path I place myself, the one whom I approach and actively seek.” (pg 58)    Being a neighbor, therefore, is a command to accompaniment, to living a “proactive place-changing love for God” (pg 61) in solidarity with God and the family of God.  It’s a love that’s “not content to stay on its own front porch.” (pg 61) “It means my place in the world changes.  To ‘go and do likewise’ means to go, courageously and compassionately, “into the ditch in order to draw near to neighbors in need.”  (pg 61) The mission of the church to go out into the margins of society, is therefore the fundamental repositioning of the human geography of our time.   It is nothing less than the command to love God with all our heart, mind, soul, and strength and to love our neighbor as ourselves.

Citations from The Ethics of Encounter: Christian Neighbor Love as a Practice of Solidarity, by Marcus Mescher, Orbis Books, 2020.