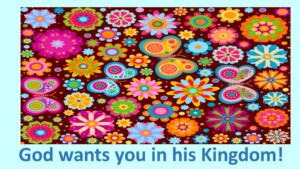 A Southern Baptist minister decided that a visual demonstration would add emphasis to his Sunday sermon.  So he placed four worms into four separate jars.

The first worm was put into a jar of alcohol.

The second worm was put into a jar of cigarette smoke.

The third worm was put into a jar of chocolate syrup.

The fourth worm was put into a jar of good, clean soil.

At the conclusion of the sermon, the pastor showed the congregation the jars.

The first worm in alcohol: dead

Then the minister asked the congregation, “So what can we learn from this demonstration?”

An elderly woman in the back of the church quickly raised her hand and replied:

“The lesson seems to be, Reverend,  that as long as you drink, smoke, and eat lots of chocolate, you won’t get worms.”

I don’t think that was the response the minister was hoping for!  I’m sure he was trying to get them to think of what sort of environment might be the most conducive for the Christian life to spread and thrive!   That’s the same sort of reflection that we’re being invited to gleam from today’s scripture readings as well!

One of the flowers that Jesus offers us today, to keep ever present in our environment, is the flower of love!   Recall that Jesus asks Peter,  “Do you love me?”  not once, not twice, but three times, symbolically to make up for the three-fold denial of Peter before Jesus’ crucifixion.

I’m sure that many of us, were we in Peter’s situation, would have also been a little disheartened by Jesus’ repetitive questioning as to whether we indeed love him.   For it could seem that Jesus doesn’t really believe Peter’s first two responses.

Perhaps, though, it wasn’t so much that Jesus didn’t trust Peter’s love for him, but rather, that Jesus wanted him to do some soul-searching, some introspection, to see whether he really knew what it would take to say he loved the Lord, and if he really wanted to be his disciple, his friend.   You see, it wasn’t just about accepting Jesus’ message.   It was about doing something about it.   “Feed my sheep,” Jesus tells him.    Love needs to be expressed in concrete ways.  For Peter, he’d have to learn how to be a servant-leader, and to get close to the sheep, the flock of people whom God would ask him to lead to the Kingdom.

In our own lives, perhaps we can take this opportunity to reflect, like Peter, on the extent to which we’re willing to show our love of the Lord and for our significant others.   We can start by making a list of the persons whom we’ve failed to love in some way, and then, assess how that failure, on our part, has affected our relationship with them.   We can also reflect on how we’ve had good intentions of following the Lord, at times, but have, for one reason or another, chosen the sinful route, rather than the one that leads to holiness and closeness to the Lord.   Once we’ve assessed the state of our relationships, it’s time for action!   What are we willing to do to change the situation?  Are we open to change, if necessary?  How are we willing to renew our relationship and express our love once more?   Is there anything holding us back?  If so, what is it?   If we need more grace to overcome the hurt we’ve caused, let’s ask for it now and never cease to be open to the Holy Spirit’s guidance in showing us the path forward, that leads to renewal.

Another flower the Lord presents to us in today’s gospel is the flower of obedience to his Word.

At its root, obedience calls us to listen attentively to the voice of God —sometimes spoken internally and at other times, spoken through others —and then challenges us to respond generously and promptly to what the Lord tells us.

In our gospel, Jesus counsels his disciples to cast their nets to the right side of the boat, and scripture records that the amount of fish they caught was so much, that they weren’t able to haul it all in.   The number of fish was 153!  Strange fact to record, right?  Not really.  According to St. Jerome, 153 is the exact number of fish categorized by Greek zoologists at the time of Jesus.  And so, by catching 153 fish, it meant that Jesus didn’t exclude anyone from the Kingdom!  He wants to offer everyone, everywhere, a share in the Eternal Life he offers!  All are offered the free gift of faith and the salvation that results from it!

Furthermore, in our second reading today from the Book of Revelation, John records, “I heard the voice of many angels surrounding the throne and the living creatures and the elders; they numbered myriads of myriads and thousands of thousands singing with full voice, ‘Worthy is the Lamb.’” If we translate this passage literally, the ‘myriads of myriads’ actually means 100 million plus 1 million —another way of expressing an infinite number of persons who are seen worshipping the Lamb in the Kingdom of Heaven!

Translated for us today, that message tells us that we, too, are called to exclude no one, but to be persons of inclusion.  Our obedience to Christ, to his Word and to our vocation, means spreading God’s Good News to anyone who will listen and wherever the Lord may ask us to cast our nets!  It means letting God tell us how to invite and how to challenge and how to live, so as to be an enticing witness to the authenticity of the Christian message.

It also means resisting the urge, at times, to think that we know best or that our convenience and comfortability must be of paramount consideration in our evangelization efforts.

No, to be obedient to the Lord means believing that God knows best and that sometimes God may challenge us to suffer or make sacrifices, in order to extend God’s nets ever wider, without our ever knowing the full picture.

We see that played out in our first reading today from the Acts of the Apostles.  There, we heard that the disciples left rejoicing that “they were considered worthy to suffer dishonor for the sake of the Name.”  (Acts 5:41)   They were willing to suffer mistreatment for being labelled a Christian and for telling others about Jesus.   They weren’t afraid to suffer persecution because they knew that the Lord was with them, Alive and Well!

Do we have that same resolve to let the chips fall where they may, so long as we’re doing what the Lord has asked of us?   Or are we instead, unwilling to be inconvenienced in the slightest, unwilling to engage with anyone who doesn’t believe, timid to share our own beliefs in the Lord, and all too ready to compromise our faith when it conflicts with secular values?  Being a Christian entails being obedient to the Lord’s will for our lives and making our obedience to God, a value that guides our every day decisions and actions.

A third flower the Lord presents to us today is the flower of worship and praise.   In our second reading, we see that worship is a constitutive element of being God’s people.   And so it should! —For worship and praise is our spontaneous response, triggered by our recognition of God’s good nature and character.   When we reflect on the many ways the Lord has blessed our lives and continues to renew his covenant with us, how can we NOT want to respond with joy and thanksgiving, with worship and praise to the Lord, for all the Lord has done for us?   Indeed, that’s what we’re doing here today!  Gathered together by faith, we’re  allowing the flowers of love, obedience, worship & praise to bloom, this day and every day, as we shout out, with all creation,  Alleluia! The Lord is Risen!