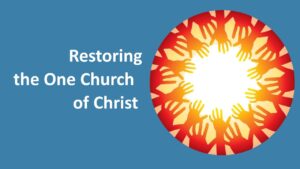 It was quiet that day; the guns and mortars, for some reason, hadn’t been heard.  The young soldier knew it was Sunday.  As he was sitting there, he got out an old deck of cards and began laying them out across his bunk.

Just then, an army sergeant came in and asked, “Why aren’t you with the rest of the platoon?”

The soldier replied, “I thought I’d stay behind and spend some time with the Lord.”

The sergeant said, “Looks to me like you’re playing with your deck of cards.”

The soldier replied, “No Sir.  You see, since we aren’t allowed to have bibles or other spiritual books in this country, I decided that I’d talk to the Lord by studying this deck of cards.”

The sergeant asked, “How will you do that?”

“You see the ace, sergeant?  It reminds me that there’s only one God.

The two represents the two parts of the Bible, Old and New Testaments.

The three represents the Father, Son and Holy Spirit.

The four stands for the four gospels:  Matthew, Mark, Luke and John.

The five is for the five virgins.   There were ten, but only five of them were prepared for the Lord.

The six is for the six days it took to create the heavens and the earth.

The seven is for the day God rested.

The eight is for the family of Noah and his wife, their three sons and their wives:  the eight people that God spared from the flood.

The nine is for the lepers that Jesus cleansed who never came back to thank him.

The ten represents the ten commandments that God handed down to Moses for the people to follow.

The jack is a reminder of Satan, one of God’s first angels.  He was vanquished from heaven for his sly and wicked ways and now, he’s the joker of Hell.

The queen stands for the Blessed Virgin Mary who crushes the serpent’s head with her feet.

The King stands for Jesus who is King of the Universe.

When I count the dots all of the cards, I come up with 365 total, one for every day of the year.  There are a total of 52 cards in a deck, one for each week in a year.

And the four suits represent the four seasons of the year.

So, you see, Sergeant, when I want to talk to God and spend time with Him, I just pull out this old deck of cards, and they remind me of all that God has done for me and all that I’m called to do for God.”

Like that soldier, maybe all of us need to take out a deck of cards, from time to time.  It’s so easy for us to get caught up in the whirlwind of activities all around us, that we can often forget the essentials.   It’s so easy for us, too, to make distinctions between different persons, cultures, religions, parishes, even different denominations of Christianity.  Instead, what Jesus desires, is for us to be united with one another—to be of one mind, heart and soul!    —To be ready and willing to see the good in the other!   —To be willing to work together for a just cause, and perhaps, alleviate some suffering in our local or worldwide community.  —To have the courage to look beyond our past failings to a promising future.  —To see in each other, the very face of Christ looking back at us.  That’s what Christians are called to do, not as individual members of the church, but together, as the One Church of Jesus Christ.

The Second Vatican Council, in its decree on Ecumenism, reminds us that true dialogue toward Christian Unity begins with an honest assessment of what we truly believe is necessary to achieve full, visible unity with one another.   Our common understanding of what it means to be church is essential in that regard.  Our understanding of the role of sacraments and how to interpret scripture are also fundamental to that Christian identity.

An unbiased assessment of political and historical factors which may have led to the current divisions and discord over the centuries is also a fundamental starting point for any serious talk about Christian unity.   Only with an honest effort to see the perspective of the other and a mutual openness to admitting our shortcomings and failures of the past, can true, genuine healing begin, and with it, a stronger sense of unity and common purpose be restored.

To achieve these godly goals, we need to see, as part of our mission on earth, the necessity of healing any and all divisions that have crept into Christianity, for such division weakens the testimony of the Gospel and the power of the Precious Blood of Christ to bring about true and lasting reconciliation.  How can those who aren’t Christian be expected to believe us when we say that we love one another, but approach another Christian with distrust, disdain, suspicion and prejudice?  How can those who are not Christian be motivated to put their faith in Jesus when they see us arguing over some of what that faith requires of us?   How can those who have yet to know Christ be drawn to enter the church when they see vicious infighting, at times,  about seemingly inconsequential issues absorbing much of the time and the money of the church?

How will we ever begin to see one another as brothers and sisters in Christ, co-heirs to the Kingdom of Heaven, equally loved by Jesus Christ whose Precious Blood was shed to reconcile us to one another and to the Father, if we don’t commit to the spirit-driven work of Ecumenism?

Paul, in our second reading today gives us a good starting point to answering these rhetorical questions when he proclaims, “For in the one Spirit, we were all baptized into one body…. and we were made to drink of one Spirit.”  (1 Cor 12:13)   Yes, a good starting point is our baptism!  For it’s our baptismal consecration that’s one of the main sources of unity that most Christian denominations recognize as an essential part of one’s journey of faith, and one which Jesus mandated himself before he ascended into heaven.   It’s akin to having a membership card for a group, except that our belonging to Christ in baptism never ends!

It makes us belong to God and to one another for all time!  It makes us brothers and sisters in Christ and bestows upon us, certain privileges.

One of those privileges is the ability to contribute to the life and spread of the church by using whatever gifts and talents with which we’ve been blessed by the Lord.  All of our varied ways of contributing to the Body of Christ are valued!  Indeed, St. Paul says,  “The eye cannot say to the hand, I have no need of you, nor again, the head to the feet, I have no need of you.”  (1 Cor12:21) When we’re baptized, we all become a part of the One Church of Jesus Christ and are called to contribute, in some way, to its expansion!  We become a family that’s always open to new life!  This One Church is larger than just the Roman Catholic Church!

Indeed, the Roman Catholic Church is just one element of the One Church of Jesus Christ.  Other Christian denominations (such as Anglican,  Baptist, United,  Presbyterian, Lutheran, Pentecostal) belong just as much as we do!    As members, we all sharers in God’s trinitarian life and participate in the divine dance by allowing God to work in us and through us to advance his reign!  In particular, at baptism, we receive an outpouring of the Holy Spirit and are guided by that Spirit of God until the end of time!     It’s that Spirit that convicts us of our past sinfulness and divisiveness and impels us to strive toward full, visible unity, each and every day.  What that full visible union will look like, God only knows!   But, most likely, it won’t be a church that looks the same everywhere, but one which cherishes a unity in diversity, and a church that’s open to dialogue with different cultural expressions and different emphases depending on where the Spirit may be leading the church at any given time.  It will be a church that listens to each member in a synodal way.

So as we continue our liturgy today, let’s acknowledge that what we share, in common, is far more lasting than anything that can ever tear us apart.   And let’s work toward a future, boldly led by the Holy Spirit, that will bring about an end to denominationalism and bring about God’s desire for the full, visible, union of the One Church of Christ.