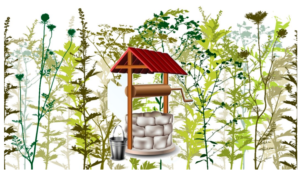 Justin Trudeau is taken on a tour by the US president of various tech companies in the US to show him their superiority.
“This,” says Joe Biden, “is the smartest super-computer in the world.  Ask it any question you want, and it will answer you correctly.”
Justin is intrigued by this and so, he decides to see if he can trick the computer.  “Computer,”  he asks,  “Who will be the world’s greatest superpower in 100 years from today?”
The computer goes silent for a minute, and then prints out a paper, which Joe Biden takes.
“So?” asks Justin. “What does the computer say?”
“I have no idea,” replied Joe. “It’s written in Chinese.”

Superiority.   That’s what our gospel narrative is asking us to reflect upon today.   That’s the weed we’re being invited to root out of our lives and our church, our nation and our world. To understand the role of superiority in today’s gospel, though, we first need to acknowledge the unspoken understanding that Jews had of Samaritans at the time of Jesus, and the understanding that Samaritans had of the Jews.   Who were the Samaritans?   They were the people who colonized the land between Galilee and Judea after the Assyrian army forced much of the Jewish population into exile in 722 BCE for 70 years.  When the Jews returned, the people who had colonized the land, had partially adopted Israel’s religious belief system over the centuries, but were always thought of by the Jews, as semi-pagan invaders, as less than holy, as interlopers to the Faith that had been entrusted by God to Abraham and his descendants.  The biggest bone of contention between Jews and Samaritans, was whose place of worship was preferred by God.    Jews believed the site which God chose for his dwelling was Mount Zion in Jerusalem, whereas the Samaritans believed that God had chosen Mount Gerizim near Shechem.

It was there that the Samaritans built a temple to rival the temple the Jews had built in Jerusalem on Mount Zion.  And thus began the dispute over whose site of worship and whose people were superior to the other.

Although Jesus was a Jew,  he wasn’t about strengthening the feelings of superiority of the Jewish Nation, nor was he about furthering the divisions and mistrust between these two groups of people.  Far from it!  Jesus was about breaking down the barriers between Jews and Samaritans and to enter into dialogue which would lead a person closer to God’s will for their lives and seeing him as the promised Messiah.

Notice in the story, that it’s Jesus who approaches the Samaritan woman, not the other way around.   The gospel makes a point to record that it was about noon, a most unusual time to draw well-water.  That detail is very significant, because it tells us that the Samaritan woman wasn’t welcome at the well when the other, more respectable women in the area, were there to draw water.   Because of her sinful status, she had to, instead, come at the hottest time of the day, after all of the others had departed.

And notice what Jesus does.   He uses the common need everyone has —-for water —to talk to the woman about a different kind of water,  water that will become a spring inside a person gushing up to eternal life.   This water of which Jesus speaks isn’t water in the physical sense.  It’s the faith that everyone is called to embrace in him, a faith that renews us from the inside out and makes us inheritors of eternal life!  And that journey of faith, that taste of water leaping up within us, is one that’s meant to be attractive to all people, everywhere.

One thing we can say about Jesus—He’s a great salesman!   He makes what he has to offer irresistible to the Samaritan woman!  I’m sure all of us would have responded much like her,  “Give me this water, sir, so that I may never be thirsty” again! Who wouldn’t want their hungers and longings satisfied, so that their emptiness would never again return!   Who wouldn’t want to experience living eternally with God!   And that’s why Jesus chose to focus on what everyone had in common and needed,  and not on what set them apart.

But Jesus goes even a step further!  He isn’t just about finding the common denominator.  He’s also about getting into the nitty gritty of our personal lives too, because he knows there are things that are unique stumbling blocks in each of our personal lives that perhaps, we’ve been avoiding.  Jesus loves us too much to let us wallow in our sins for one moment longer than we have to.    And that’s why Jesus, rather than sending the Samaritan woman on her merry way,  tries to help her to get her life back on track, by challenging the woman about her personal relationships with five different men.   By doing this, Jesus wasn’t attempting to ridicule the woman or to show his superiority to her, and the woman certainly doesn’t take it, that way.   Far from it!  The woman realizes that Jesus isn’t just some ordinary Jew sitting by a well at noon time!  She interprets her words as intending to lift her out of her sins, to let her see that God values her life, values the choices she makes, and desires her to have an authentic and life-giving relationship, some day, with the man she’s destined to marry.

Furthermore, while Jesus makes no bones about his commitment to his Jewish identity and to the salvation which the covenants given to the Jews proclaim, he wants to bridge the gap with the Samaritan woman even further by obliterating the age-old argument over which mountain God prefers to dwell over all others.

He says to her,  “The hour is coming and is now here, when the true worshippers will worship the Father in Spirit and truth, for the Father seeks such as these to worship him.” (John 4: 23)

The gospel records that when the Samaritan woman realizes Jesus is the messiah, she leaves in excitement to tell her Samaritan friends— and guess what?  They want to meet him too!  And when they finally get the opportunity to encounter Jesus themselves, the gospel notes that Jesus spends two days in their company.  And it’s this time which they had to spend with the Lord, that left no shadow of a doubt in their minds that Jesus was, none other than the Messiah, the Savior of the World.

And all these coming to faith moments started with a simple Samaritan woman at a well, whom Jesus asks for a drink of water! We can learn from Jesus’ example. Sometimes, we think evangelization has to be hard.  It doesn’t!  It starts by finding something two people can talk about and going from there. I find in interesting to note that the gospel never says that Jesus received that drink of water he had asked for, from the woman!   Instead, the story focusses on the wellspring of eternal life that the woman receives from Jesus, by coming to believe in him.

Jesus is sitting at the well of our hearts today!   He knows that sometimes, all of us feel like this Samaritan woman.  Sometimes, we feel isolated and inferior because of our sins.   We sometimes may even convince ourselves that we’re unwelcome to be in the presence of Jesus.   At other times, too, we may even begin to believe the harsh things others may say or think about us and come to accept their treatment of us, as justified.   Jesus, though, in our Gospel, reminds us that there’s no place we can go, where he won’t come to find us.  There’s no barrier of sin that he can’t tear down. There’s nothing we could have done or have failed to do that could ever keep Jesus from approaching us, entering into dialogue with us, challenging us to rediscover our authentic selves, and inviting us to rekindle the life of faith that wells up to eternal life.   So when Jesus asks you for a drink, be sure to respond.  You may be surprised at what you get in return!