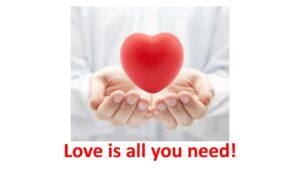 Bill and Steve are discussing the possibility of love. “I thought I was in love three times,” Bill says.
“Thought?” Steve asks. “What do you mean?”
“Well, three years ago, I cared very deeply for a woman who wanted nothing to do with me,” Bill says.
“Wasn’t that love?” Steve asks.
“No, that was obsession,” Bill explains. “Then two years ago, I cared very deeply for an attractive woman who didn’t understand me.”
“Wasn’t that love?” asks Steve.
“No, that was lust,” Bill replies. “
And just last year, I met a woman while I was on a cruise. She was gorgeous, intelligent, a great conversationalist and had a super sense of humor. Everywhere I followed her on that ship, I would get a very strange sensation in the pit of my stomach.”
“Well, wasn’t that love?” asks Steve.
“No. That was motion sickness!” Bill replied. (jokes.christiansunite.com)

So what, in fact, is love? For the Christian, answering this question is not an option. It’s fundamental to everything else that we do! St. Paul goes so far as to say, “If I speak in tongues of human beings and of Angels but do not have love, I am a noisy gong or a clanging cymbal.” (1 Cor 13:1) He says too, that faith that can move mountains is also useless if it doesn’t have love at its base, as are also great acts of sacrifices, acts of dedication, and miracle working rendered meaningless without the love that’s meant to undergird them. So clearly, knowing what love is and what it isn’t, is vital to living out our Christian life and becoming the persons God has called us to be.

Indeed, St Paul calls it a more excellent way, than even using our own gifts and talents for the Lord’s glory because people may have different gifts, but everyone has access to love.

Let’s get back to the image St. Paul uses for the antithesis of love. Gongs and cymbals. All of us have heard noisy gongs and clanging cymbals! Sometimes, they can be down right deafening and distracting. If they persist, they can become quite irritating, especially if they’re played out of step or out of tune with the rest of the musical instruments. What’s more, like the gongs and cymbals, our lives can become a cacophony of inconsistencies that mitigate against any real ability to lead others to Christ. Only if a musician knows how to play the gong or the cymbal in the appropriate manner and with the right timing, will the instrument add to the melodious sound of the complete musical score.
The same is true of our Christian witness. We have to know how to integrate love of God and love of neighbor into all the aspects of our daily walk, so that our lives become a beautiful symphony of praise and honor to our Lord Jesus Christ. There are, in fact, four different words used for love, in the Bible, depending on the type of relationship one has entered. The first kind is love which is unconditional, and which is the kind of love God has for us and that we ought to have for God; the second is love that exists between parents and their children and among siblings for one another; the third is love that exists between friends, and the fourth is love that’s directed toward one’s romantic partner or spouse. All of these forms of love, however, have some basic, all-encompassing components to them that St. Paul delineates in his first letter to the Corinthians.

For love to be genuine, then, St. Paul begins by asserting that it must be patient and kind. If I had to pick, I’d probably say these two qualities of love are probably the ones that are in the shortest supply in these days of pandemic.

There’s even a new name for it: compassion fatigue! People are just fed up with being patient and kind to those who have chosen not to follow the public health guidelines and instead, often become increasingly sick themselves or even threaten the health of those around them. People are fed up, as well, with waiting in long lines to be screened.

People too, have become short-tempered when it comes to seeing people blatantly disregarding public safety guidelines when out shopping, or while out at some other public venue. People can become easily irritable too, when they expect everyone else around them to be perfect or for events in which they’re involved to run smoothly, all the time. One of the remedies to such irritability and short-temperedness is the third quality of love that St. Paul delineates: humility.

Meaning ‘from the ground,’ being humble requires that we remain grounded in who we are and ready to accept the limitations we’ve been given. It means reflecting on the best possible course of action to help ourselves or someone else achieve their fullest God-given, human potential. It means knowing we’re not God and that we may not have all the answers to the problems which beset us or which we encounter in the lives of another. It means being open to changing our perceptions or ideas of persons or events and being always ready to give the other the benefit of the doubt when we don’t have the full picture. Such humility prevents us from becoming boastful, arrogant, envious of others, or rude. Such humility prevents us from becoming resentful of others too, or highly critical of them. Such humility leads us closer and closer to the truth of the reality with which we’re faced, even if that reality sometimes paints us in a bad light.

Indeed, it’s a readiness to embrace the truth about us and all around us that’s another facet of love for the Christian. Sadly, in our world today, the truth is hard to come by!

There’s so much disinformation, spin, and outright lies being propagated on social media platforms, and by biased news channels, and by a lack of any accountability when disinformation is spread, that it’s sometimes hard for the everyday Christian to determine what’s true from what’s false. What makes matters worse, is if we only get our news only from one source and aren’t critical of the reporting when it may be inconsistent with other reporting about the same event from a different source. Love though, requires that we remain committed to discovering the truth wherever it might lead. It requires an openness to facts and verifiable data. It requires a commitment to being open-minded when opposing views are presented to us and for our own views to be continually scrutinized by the lens of the Gospel and the teachings and priorities of Jesus Christ, who identified himself as the Way, the Truth and the Life. The Christian worldview should always be in concert with Jesus’ vision of a Kingdom of Justice and Peace, Jesus’ commitment to the poor and the marginalized, Jesus’ focus on those without voice and without power, with those whom others have discounted as unworthy of their time, care, and attention.

Such truthfulness enables love to bear with all the imperfections of our world as it harkens us to a better world to come, one in which God’s reign leaves no room for lies, disconnection, and dishonesty. It enables love to endure difficult and trying times, knowing that such times are temporary. It never gives up hope that things can change for the better, if we but allow God into the picture and to do what God does best: reveal the truth. It proclaims that such love can never be defeated, overcome, or blotted out of existence because it’s based on the love which God has poured into our very hearts and for which he suffered and died and rose victoriously on the third day. It’s such love that is the love which the Christian lifts up to the world for all to see and encourages all to draw ever nearer. May we always be committed to embracing this vision of Christian love, each and every day of our lives.