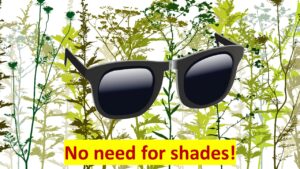 Joe Biden is out jogging one morning and notices a little boy on the corner of the street, holding a box.  Curious, Joe runs over to the child and asks, “What’s in the box, kid?”

Joe Biden laughs and asks, “What kind of kittens are they?”

A couple of days later, Joe Biden is running with his VP,  Kamala Harris.   Joe says to her, “Kamala, you gotta check this out,” and they both jog over to the boy with the box.

Joe says, “Look in the box Kamala.  Aren’t they cute?!  Look at those kittens.   Hey kid, tell the Vice President what kind of kittens they are.”

“Wait a minute!” says Joe Biden.  “I came here the other day and you told me the kittens were Democrats.  What’s up?”

Eyes open!  Anything that keeps our eyes shut, our lives blinded by sin, our hearts, minds, and souls from wholeheartedly embracing our faith in the Lord, is the weed that we’re being invited to uproot this weekend!

What are some of the weeds we can identify in our scripture readings?   Our first reading from the First Book of Samuel identifies the human tendency to judge others based on external appearances alone as a weed.   Recall that when Samuel had been sent by God to Jesse’s family to find the next King of Israel, he thought that the person he would find, would be most handsome, strongest, most experienced and tallest of all those presented to him.  Yet, that was far from God’s vision of whom God had chosen.   God tells Samuel, “Do not look on his appearance or on the height of his stature, because I have rejected him; for the Lord does not see as the human sees.  The human looks on the outward appearance, but the Lord looks on the heart.”

And so, after reviewing seven sons of Jesse, all of whom fitted the mold of what, by human standards, one would have desired in a great leader, God chooses none of them at all for that role.  It’ then that Jesse reveals that there’s one more son he has, the least likely in Jesse’s mind to be destined for leadership:  the youngest of them all, who’s out tending the sheep.   And sure enough, its that son whom the Lord selects to be anointed by Samuel and whom, we’d later come to know, as King David.

In our own lives, do we ever allow the weed of our tendency to judge by external appearances to affect our own decisions and ways of relating to one another?  Certainly our media thinks we do, as they try to sell us products and services based on a beautiful or famous person’s recommendation or on the basis of how it can make us more like them.    Sometimes, we may even be affected by another person’s outward display of wealth, power or social popularity.  But when we do so, we’re not allowing their unique giftedness and hidden potential to be expressed.  We’re not giving ourselves the opportunity to dig deeper and to get to know who the person really is, on the inside.

Another weed we have to root out of our lives, in this Lenten season, is our feeling of being unworthy of God’ time, attention, or concern.  It’s noteworthy, that in our gospel, the blind man isn’t the one who calls out to Jesus for healing.  It’s a question from one of the disciples who about why the man was blind from birth that prompts Jesus to put mud on the man’s eyes and to instruct him, to later wash in the pool of Siloam,  and which ultimately, enables the man to regain his sight.   In our own lives, have we ever felt unworthy of turning to God because of our past sins?   Have we ever stopped praying because we think that God won’t hear us or be merciful toward us?   Do we ever allow others to dictate whether or not we’re worthy to  approach God and be healed of our brokenness and to have our troubled spirits restored?

Conversely, do we ever prematurely judge others as unworthy of our time and attention or make excuses as to why we don’t need to reach out to a particular person or a group of people whom we or others have labelled as unworthy?  When this happens, the misconceptions we have of ours or another’s plight can grow like a weed to block the life of grace that God wants us to experience and from making life-changing transformations that will help us to become more like Christ.

Connected to the weed of unworthiness is another weed that we sometimes find creeping up on us.  It’s our despair at overcoming a particularly sinful habit.  Sometimes, we may have just grown too accustomed to a particular sinful action over the years, that we’ve lost all hope of ever changing it or overcoming it.  We’ve compartmentalized it in our lives and haven’t allowed God’s grace to enter there in a long time.  Our second reading from the letter to the Ephesians, though, is meant to reinvigorate us and to give us renewed energy to try once more.  The writer urges us, “Sleeper, awake!   Rise from the dead, and Christ will shine on you.”  (Eph 5: 14b)  The ashes we received on our heads this year are a blessed reminder to all of us of our death and that, despite our past sinfulness, we can make a firm resolve, with the help of God’s grace, to live, renewed in the Holy Spirit, and full of the light of God’s grace!

For that to happen, though, we need to name the sin,  reflect on the root causes of the sin, come up with a plan ‘A’ and a plan ‘B’ to remove ourselves from the source of the temptation,  and pray to God, to give us the strength to move, courageously forward, in God’s light.  Sometimes the sacrament of reconciliation is helpful in this regard, as it gives us the opportunity to hear God’s words of forgiveness and peace and enables us to seek advice from the priest in coming up with alternatives for choosing differently in the future.

Another weed we need to root out is our proclivity to blame others for the problems we experience in life.  Sometimes, when we play the blame game, we find ourselves gossiping or criticizing the actions of someone else, and oftentimes, without knowing the full story.

We see that recorded in our gospel story, today, too.   The pharisees want to blame Jesus for breaking the sabbath by his cure of the blind man.  Rather than seeing the cure as a sign of the impending Kingdom of God drawing near, the Pharisees become jealous that God chose to act through Jesus whom they had labelled as a sinner.

And when they approach the man born blind and the man’s parents, we uncover another weed coming to the fore:  Fence-sitting.  Being interrogated by the pharisees, the parents of the blind man choose not to take a side regarding their son’s miraculous cure.   They say, “We know that this is our son and that he was born blind, but we do not know how it is that now he sees, nor do we know who opened his eyes.”  (John 9: 20-21)   We have a lot of fence sitters in our world today.  —people who don’t want to make life-changing decisions  —people who choose not to reflect on what they can’t explain.  —people who choose not to get involved.  But fence-sitting is in itself, a choice!  When we fence-sit, we choose not to choose, and such a decision leaves us uncommitted and unresponsive to the needs of others.  Simply stated, fence-sitting is not a Christian value.

The final weed we find growing in today’s gospel, is a stubbornness to see ourselves, others, and our world, in the way God sees them.    Jesus says, “I came into this world for judgment, so that those who do not see, may see, and those who do see, may become blind.”  (John 9:39)  In other words, what will it take to open our eyes to Jesus’ love and care for us?   What will it take to allow the light of Christ to penetrate the deepest weeds we’ve allowed to grow within us?   What will it take, TODAY, RIGHT NOW,  to look into the piercing eyes of our Lord Jesus Christ and allow him to weed out our sinfulness?  Jesus is ready and willing! Are you?