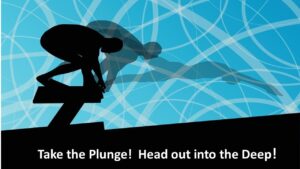 Why didn’t Noah do much fishing on the ark?      He had only two worms.

While today’s gospel story centers on fishing, it’s really not about fishing at all!    It’s about reflecting on the level of trust and faith we have in following the example and will of our Lord and Savior, Jesus Christ!   We see, in our gospel story, that Simon Peter, at first, resists the request of Jesus to bring the boat further away from the shore and to cast his nets into the deep waters.    He must have thought to himself, “What’s Jesus thinking?!  I’m the fisherman!  I’m the one who’s made his life out of catching and selling fish!  I’m the one who’s spent all night long out on this lake and caught nothing whatsoever.   I’m the one who knows where to cast the nets because I know where the fish, typically, are found!  This isn’t my first time fishing!”

It’s this resistance, that if, not overcome, would have said a lot about Simon Peter’s lack of trust and lack of faith in the one whom he would later come to know as the Messiah.   Yet, there must have been an inkling of trust and faith somewhere, inside Simon Peter! And that’s all Jesus needs!   Once Simon Peter does as Jesus directs, his nets catch so many fish that the nets begin to break and even the one boat becomes too small for the enormous amount of fish that  are caught, so much so, that they need the second one to help with the haul.

The lesson Jesus wants to teach us in this gospel story is that we sometimes think we know how to attract others to the church, more than Jesus does.   We sometimes think we’re the experts when it comes to leading others to the church, that we know what works and what doesn’t and how much time and energy we need to invest.  We’re familiar with the territory we’ve been given.  We have the right program, the right lingo, the right venue to accomplish our task.   And yet, despite all our best efforts, despite all the latest programs and promotions, despite doing all the things we were told would “work,”  we still end up with not much of a “new catch” at all.

Why is that?   Maybe it’s because we’ve left Jesus out of the equation!  Maybe, the first and most important thing we need to do, is to pray and ask Jesus to help us in our great task of evangelization, to be inspired by his simple and yet challenging invitation to come and see, to become fishers of people, to have no fear but to trust and have faith in his Word to lead others to Himself.   One of the reasons Jesus asked Simon Peter to cast out into the deep was because the crowd was pressing in on him to hear the word of God.  That Word was attractive and compelling to them.  It made them stop and reflect on their own life priorities.  It challenged them to leave sin behind and to start living, from this day onward, dedicated to spreading the Good News!

The ‘deep’ can have a more theological meaning too!  It can be Jesus’ way of saying, “Go out into the unknown.  Go where no one else dares to go; do what no one else dares to do; venture out into seemingly impossible situations and contexts, armed only with the Word of God to reach troubled hearts.   Expect delays, problems and setbacks along the way, but never give up faith that I’m with you through it all, and that if you remain faithful to me, that there will be an abundance of grace poured out and overflowing for all to see!

A second message of today’s gospel then, is about overcoming the obstacles we ourselves sometimes place in the way of God working and acting in us and through us and all around us.

Notice that after Jesus’ miraculous catch of fish, Simon Peter falls down at Jesus’ knees and says, “Go away from me Lord, for I am a sinful man!”  (Lk 5:8b)  Yes, it was Simon Peter’s own sense of sinfulness that kept him from believing that Jesus could do the impossible!  It was his old mindset of the ways things should be done that kept him from embracing a different way of doing and seeing things.

It was Simon Peter’s feelings of unworthiness too, that kept him from thinking that God could and would use him to lead others to Christ!   We see the same feelings of unworthiness reported in today’s first and second readings as well.   Isiah laments, “Woe is me!  I am lost, for I am a man of unclean lips and I live among a people of unclean lips.”  (Isa 6: 5)  And Paul writes in his letter to the Corinthians, “I am at the least of all the Apostles because I persecuted the Church of God.”  (1 Cor 15:10a)

Yes, all three of these giants of our faith, at one point or another, felt unworthy to be called by God to lead others to the Kingdom.   All three of them were afraid at letting God down, of not being up to the task.   And yet, all three of them were able to overcome their feelings of unworthiness, sinfulness, and fear because God steps into the picture with his grace.   For Simon Peter,  Jesus says to him, “Do not be afraid, from now on you will be catching people.”   For Isaiah,  God sends a seraph to touch his mouth with a live coal taken from the altar and the seraph says, “Now that this has touched your lips, your guilt has departed and your sin is blotted out.”  And from that moment on, Isaiah volunteers to be sent wherever God desires.   And Paul himself has a moment of insight when he says,  “I am what I am, and his grace toward me has not been in vain.” (1 Cor 15: 10b) Indeed, it was the Grace of God working in Paul that led many Gentiles to faith in Christ!

What is our obstacle that we place in the way of God working in and through us?  Perhaps it’s a feeling of unworthiness as well.  Maybe it’s prompted by our sinfulness and our resistance to repenting and starting over.   Maybe it’s our hesitancy to try something new, or to fail at trying at all.  Maybe it’s a fear that God will ask of us something that’s too grand, too difficult, too time-consuming and we’re afraid of letting God down.    Sound familiar?

Sounds a lot like the same sort of obstacles Simon Peter, Isaiah and Paul had to overcome themselves, and all three of them did, with God’s grace!  All three of them did because God’s love had been poured into their hearts and forever made them feel that they’re never alone, that they ARE worthy, that God’s Spirit would be continually with them, to help guide them in moments of desperation, anxiety, and exasperation.

Personally,  as a Missionary of the Precious Blood whose ministerial outreach spans 17 countries worldwide, I never would have imagined in a million years, that the majority of my priesthood would be spent in Northern Ontario!  But that’s where God needed me to go!  That’s where the Spirit of God led me! That was where the calling of Jesus to ‘go out into the deep’ led me.   And had I resisted that movement of the Spirit, I would have missed out on all the experiences that has made me into the priest I am today!  I would have missed out on the many opportunities the Lord gave me to cast God’s nets ever wider in the various ministries with which I have been engaged, and to offer others an experience of the inclusive love that the Church is called to embody to those who have felt unloved, unwanted, or uncared for.   So let’s embrace our “deep” waters wherever they may be, and wherever they may lead, and never forget the example of Simon Peter, Isaiah, and Paul whose own lives demonstrate God’s ability to make the impossible, possible.