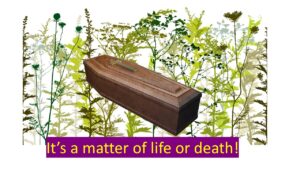 An old priest was dying and sent a message for his banker and his lawyer to come to the rectory.  When they arrived, they were ushered to his bedroom.  The priest motioned for them to sit, one on each side of his bed.  He then grasped their hands smiled and stared at the ceiling with a contented look on his face.    Both the banker and the lawyer were flattered that the priest wanted to be with them during his final moments on earth, but they were also puzzled, as the priest had never given, either of them, any indication that he particularly liked them.

Finally the banker asked,  “Father, may I ask you something?  Why did you summon us here?”

The priest mustered every bit of strength he had left and replied,  “Jesus died between two thieves and that’s how I want to go, too!”

Yes, every now and then, it’s helpful to think about death.   Today’s story of the death of Lazarus and his later resurrection provides an excellent opportunity to do just that.   I’d wager that if most of us were asked, we’d probably say that we want to stay alive as long as we can and to do as much as we can with the time given to us on earth before we die.

And yet, sometimes, our actions don’t reflect that conviction.   Sometimes, we actually, knowingly or not, choose death over life!   What do I mean by that?  I mean that sometimes, we choose to remain in the past, with the way things were done before, and don’t give ourselves the opportunity to live in a different, easier, new, or more enlightened way.    Sometimes, we become too comfortable with our lifestyles, our jobs, and our responsibilities at home and the people that we normally encounter in our day-to-day living, that we choose to close ourselves off to improving our  relationships, our jobs, our daily encounters with people, and the way we treat our environment.    At other times, we may resist learning and adapting to new ways of relating to family members, or new ways of being church, and from embracing other cultures, and from shaping a better, more just society than the one in which we were born.

When this happens, we allow the weed of a death-mentality to gain a strong foothold in our lives.  Such a weed prevents  us from discovering the new life God has in store for us.

To counter this death-mentality, we need to resist the temptation of becoming complacent in our lives or in the relationships we have with one another or with our world.    If we stop and think about it, the root cause of such complacency is usually a fear of the unknown, a resistance to new information, or a distrust that anything good will result from a change in our lives.    But such fear, resistance, and distrust reveal an unwillingness to hear and respond to the promptings of the Holy Spirit who’s always about getting us to move and to act in ways that will lead others to the church, to actualize gospel values of the Kingdom, and to make our world, more like, the Kingdom of Justice and Peace that will endure beyond space and time.

As a source of encouragement, the Bible is packed with people who were courageous and resisted the urge to play it safe and who didn’t let fear stop them.   Think of Abram and Sarai who left their home of Ur to go into a new land with only a promise of God that their new lives would be better than the one they were currently living.   Think of Noah and his family who, amid the jeerers and nay-sayers, built the ark and had to start from scratch, once the flood had subsided.   Think of the Jews in slavery who had escaped from Pharoah’s hands and wandered in the desert toward the promised land.  Think of Mary whose life was turned upside down with the invitation of the Angel Gabriel to be the mother of God.   Think of the apostles who were told to leave everything behind and to follow the Lord without question.    Think of Paul who left Judaism to become an Apostle of the one whom he had been persecuting.

I could go on, for quite some time, citing references in the Bible and church history, of people who were at a crossroads in life and had to choose between playing it safe and taking a risk, between choosing a comfortable life and living each day by faith alone, between not rocking the boat and blowing wind in its sails!

When we adopt a life over death mentality in our personal lives, such a mentality necessarily overflows into the ways in which we interact on a global scale, to bring new life and fresh perspectives to people we may never meet and events that we may never directly confront, but which are, nevertheless, in sore need of our help and support.

This year’s Development and Peace Campaign, entitled, ‘People and Planet First’ recognizes our Christian responsibility to intervene on behalf of those who have no power or voice and whose lives are being affected by corporate greed and a willingness to violate basic human labor rights.   As the campaign acknowledges, “More and more activists are being threatened and killed for protecting the forests, waters, and biodiversity” of which our people and planet are most in need. “The most vulnerable members of our human family are bearing the largest burden, dealing with the worst impacts of climate change and facing negative effects of ill-planned, top-down climate ‘solutions.’ ”   The way things have always been done in the past are simply hurting the poorest of the poor and also affecting our global climate in deleterious ways.

Development and Peace urges us to pull out the weed of this death-mentality,  to object to policies that kill the future of “our communities, our economy, our health and the health of our planet for years to come,” and to ensure that we foster a “transition towards a just economy,” one  “that addresses integral human development. We can ensure that human rights are respected and environmental harm is avoided by improving “our global and national climate policies  and ensuring that “people and the planet are at the very centre of a ‘just’ recovery.”

I’d  now like to show you a video by our bishop about this year’s campaign.