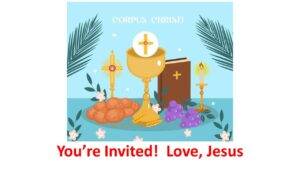 An elderly wife decided to have her portrait painted.   The artist asked if she had any requests.

“Yes, I do,” she told the artist.  “Paint me with diamond rings, a gold necklace, emerald bracelets and a ruby broach.”

“Why?” asked the artist.  “You aren’t wearing any of those things.”

“I know, replied the wife.  “It’s in case I should die before my husband.  I’m sure he’ll want to remarry right away, and I want his new wife to go crazy looking for the jewelry.”

That elderly wife knew that priceless jewels have the ability to attract others to them, just as they are valuable to the one wearing the jewels.   Well everyone here has been given something priceless, that we hope others with whom we come into contact, will want in their lives as well!   It’s the priceless jewel of the Eucharist, the Body and Blood of none other, than the Son of God, himself!   On this solemnity of the Body and Blood of Christ, we’re being invited to reflect on the blessing of this great treasure in our lives and to attract others to seeking this precious jewel for their own lives as well.

One of the popes that started us on the path toward renewed appreciation of the Eucharist was Pope St. Pius X, who became known as the ‘Pope of the Blessed Sacrament’ because of the decree, Quam Singulari, which he issued in 1910.  In that decree, he changed the age at which communion could be received from the age of 12 which had become the norm since the 13th Century, to the age of 7, which he called the age of discretion or reason.     In his mind, the motive for the change in age was that “children are held to Communion by necessity and by precept when they are capable of losing grace by sin.” (QS)  So, when one can discern right from wrong, it’s time for that person to be strengthened against sin by receiving holy communion.

The pope further noted that “in ancient times the remaining particles of the Sacred Species were even given to nursing infants.  Such a practice “indicates that no extraordinary preparation should now be demanded of children who are in the happy state of innocence and purity of soul, and who, amidst so many dangers and seductions of the present time, have a special need of this heavenly food.” (QS) Additionally, the pope notes that “the history of the Church reveals that a number of synods and episcopal decrees beginning with the twelfth century, shortly after the Lateran Council, admitted children of seven years of age to First Communion.” (QS)

Following on this path of renewal was Pope St. John XXIII who announced on January 25th 1959, an aggiornamento in the church, an updating and evaluation of everything having to do with Catholic life.  It was the council later to be known as Vatican II.  And not surprisingly, the first issue that the bishops of Vatican II around the world felt had to be addressed, was the Mass, what we do and how we do it when we come together for the worship.  The bishops at that time were concerned that the mass had become more of an observance by the people than a celebration of our faith.    They wrote, “The Church therefore earnestly desires that Christ’s faithful, when present at this mystery of faith, should not be there as strangers or silent spectators.  On the contrary, they should participate knowingly, devoutly and actively.”  (SC 48)  They went on, later in the same constitution, to assert, “It is very much the wish of the church that all the faithful should be led to take that full, conscious, and active part in liturgical celebrations, which is demanded by the very nature of the liturgy and, to which, the Christian people….. have a right and to which they are bound, by reason of their baptism.”  (SC 14)

To foster this active participation,   the bishops encouraged the mother tongue of the people to be used in the mass as it had been in the early church.   Jesus didn’t celebrate the last supper in Latin.

He celebrated it in the language of Aramaic, the language from the region where he lived.   And while the final constitution decreed that the use of Latin was to be preserved, it gave the local bishops the authority to determine whether, and to what extent, the vernacular (or language of the people) could be substituted for Latin in the mass.  (SC 36) And as we know, most bishops decided, after Vatican II, to implement the use of the vernacular in the Mass in order to encourage greater participation by the gathered assembly.

In addition to these changes, there was also a call to go back to the original biblical narratives of the last supper  (known by the French term, resourcement).   When we do so, we can see that Jesus celebrated the mass around a table with his disciples gathered ‘round, to share the common meal.   So the altars that were attached to the sanctuary wall became free-standing, as they were in the early church, so that the priest presider could now face the people as he led them in prayer.    Furthermore, by virtue of their baptism, some liturgical ministries were now opened to the lay faithful, and not just for those who were in training to become priests.

With resourcement as a guiding principal, the bishops decided that the ancient practice of receiving both the Body and the Blood of Christ in the form of bread and wine could be re-introduced to the assembly of the faithful again, with the local bishop’s permission.   While current Covid restrictions have caused us to limit the reception of the Precious Blood in the form of wine to the people at this time,  we hope to reintroduce the reception of the Precious Blood in the chalice, once the use of a common cup is no longer a hindrance to public safety.  Until that time comes, the theology of the church reminds us that the Host is the Living Body of Christ and as a Living Body, it thereby contains the life-giving Blood of Christ in every particle of his Body.

Motivated by resourcement,  Pope St. Paul VI  in 1969 allowed the people of God to receive Holy Communion in the Hand in his instruction, ‘Memoriale Domini.’  He writes, “In recent years, a fuller sharing in the eucharistic celebration  through sacramental communion  has, here and there, evoked the desire to return to the ancient practice of depositing the eucharistic bread in the hand of the communicant, he himself, then communicating, placing it in his mouth.  (MD)   “The fact that the lay person is now able to receive communion in the hand should not suggest to him that this is ordinary bread, or just any sacred object.  Rather, it ought to strengthen his sense of his dignity as a member of the mystical body of Christ, of which, baptism and the grace of the Eucharist, make him a part.   He will thus experience an increase of faith in the great reality of the Body and Blood of the Lord, which he touches with his hands.”  (MD 3)  In other words, receiving the Host in the hand is an ancient practice that predates receiving communion on the tongue and is one way to increase our faith in the Lord and to reaffirm our baptismal consecration.

Pope Francis also continues to call us to resourcement, when last year, at a gathering for the Angelus in St. Peter’s Square on the Solemnity of Corpus Christi,  he said that the Eucharist is  “the strength to love those who make mistakes. It is on the night he is betrayed that Jesus gives us the Bread of Life. He gives us the greatest gift while he feels the deepest abyss in his heart: the disciple who eats with Him, who dips the morsel in the same plate, is betraying Him. And betrayal is the worst suffering for one who loves. And what does Jesus do? He reacts to the evil with a greater good. He responds to Judas’ ‘no,’ with the ‘yes’ of mercy. He does not punish the sinner, but rather gives His life for him; He pays for him. When we receive the Eucharist, Jesus does the same with us: he knows us; he knows we are sinners; and he knows we make many mistakes, but he does not give up on joining his life to ours.

He knows that we need it, because the Eucharist is not the reward of saints, no, it is the Bread of sinners. This is why he exhorts us: “Do not be afraid! Take and eat”.”  (PF Angelus 2021)

The resourcement that continues to inspire reflections on the Eucharist, calls us to appreciate the Last Supper anew, every time we come together for worship and praise of God.   It calls us fully, actively, and to consciously participate in the mass to be best of our abilities and to see our spiritual lives not in isolation to fellow believers, but alongside them.   Devotion to the Body and Blood of Christ can’t be just something we do on Sundays.  It’s something that we must weave and celebrate throughout our lives and something that we must treasure, at the very core of our Christian calling, as a precious jewel.