Let’s keep calling for due diligence to put People and Planet First!

Development and Peace’s People and Planet First campaign continues this fall calling on Canada to prevent its corporations from abusing human rights and the environment in their overseas operations and global supply chains. Since September 2021, over 24,000 people have signed our petition calling for Canadian due diligence legislation.

Become a member of Development and Peace to live out your faith (devp.org/joinus). Act in solidarity with the communities whose struggles for a more just world we support.

Petition Presentation to our local MP

On May 24th a delegation from Holy Redeemer met with Viviane Lapoint, our local member of parliament to present our signed D&P petition from the Fall 2021 Campaign with 116 in-person signatures.  The petition calls on the Federal Government to

enact due diligence legislation to ensure that Canadian companies with operations in the global south conduct business in a manner which respects the environment and safeguards human rights.

This Lent, let’s put people and planet first as we continue in our theme from the Fall Campaign with a shift in focus to helping the communities of the Global South to become more resilient.

Pope Francis calls young people today to form “a different kind of economy: one that brings life, not death, one that is inclusive and not exclusive, humane and not dehumanizing, one that cares for the environment and does not despoil it”. (The Economy of Francesco event, 2019)

It is time for the dignity of the human person and the health of our common home to be front and centre. The push for profit and economic growth at all costs has meant life and death decisions are made far away from the people on the ground. With climate change, growing disparities of wealth and health and neo-colonial ideas, we see: “some parts of our human family, it appears, can be readily sacrificed for the sake of others considered worthy of a carefree existence.” (Fratelli Tutti, 18).

In 2020, 720 to 811 million people experienced hunger on a daily basis and 1 in 3 people faced food insecurity.  Sadly studies confirm that there is enough food to feed all however many do not have access to the food due to systemic inequalities caused by colonialism, exploitation, unfair debt loads which burden countries in the global south.

Let’s be inspired by, and learn from, leaders around the world who are putting people and planet first! The communities that D&P’s partners work with represent some of these leaders.  This Lent we will focus on D&P projects in 3 countries Honduras, Madagascar and Cambodia where D&P works with local partners to help communities become more self sustaining by introducing concepts such as Agroecology where growing is done in harmony with the local ecology and the Eco-village using community gardens to reduce food insecurity.

As part of D&P’s Fall 2021 Campaign the D&P Parliamentary petition asks the federal government to enact laws that will compel Canadian companies to conduct due diligence across their overseas operations and that will give the victims of their abuses access to justice in Canadian courts.

Thank you to all members of our parish community here at Holy Redeemer who signed our Parliamentary Petition on our signing weekend, November 6&7.  We gathered 94 signatures which will be presented to our local MP – more to follow.

As of February 2022 nation-wide the parliamentary petition has 3,479 signatures and 13 meetings have taken place with Members of Parliament to present the signed petition and to urge that legislation be introduced to put new regulations in place in order to make companies accountable for injustices they cause in the global south.

Petition to the House of Commons

We, the undersigned citizens and residents of Canada, call upon the House of Commons to adopt human rights and environmental due diligence legislation that would:

In 2021 the international community will need to show courage and ambition in order to overcome the great challenges of today: from recovering from the pandemic to addressing climate change, from supporting innovation to overcoming poverty and inequality.

WHY DOES LIMITING TEMPERATURE RISE TO 1.5 DEGREES MATTER?
At 2 degrees of global warming, there would be widespread and severe impacts on people and nature. A third of the world’s population would be regularly exposed to severe heat, leading to health problems and more heat-related deaths.
Almost all warm water coral reefs would be destroyed, and the Arctic sea ice would melt entirely at least one summer per decade, with devastating impacts on the wildlife and communities they support. We cannot rule out the possibility that irreversible loss of ice sheets in Greenland and the Antarctic
could be triggered, leading to several metres of sea level rise over centuries to come.
At 1.5°C, the impacts would be serious, but less severe. There would be lower risks of food and water shortages, lower risks to economic growth and fewer species at risk of extinction. Threats to human health from air pollution, disease, malnutrition and exposure to extreme heat would also be lower.
That is why every fraction of a degree of warming matters, and why we are dedicated to keeping the prospect of holding temperature rises to 1.5 degrees alive.

Standing up to corporate power in Honduras 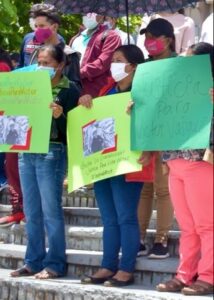 The Power of Mobilized Citizens

A Madagascan community deeply affected by impacts of climate change and poverty. Through this project, the community transformed itself into a thriving ecological village developed by and for the villagers.

Development & Peace thanks all at Holy Redeemer who so generously gave from the heart to the Share Lent Collection in support of D&P projects that empower impoverished communities in the global south.

If you have not had a chance to donate you can contribute by going to the D&P website.  You can also donate through Holy Redeemer by cheque, pre-authorized donation withdrawal, or by E-Transfer.  A tax receipt will be issued from our parish.

Please Give in Solidarity

The Canadian Catholic Organization for Development and Peace, a democratic movement for international solidarity, supports partners in the Global South in the pursuit of alternatives to unjust social, political and economic structures.

We pray for Development and Peace’s partners; may they continue, through our support, to build a world of kindness, justice and peace.

After the Storm: Building the Pope Francis Village, the Philippines

This 47-minute documentary, is an inspiring journey that follows poor coastal communities in Tacloban, the Philippines who lost everything to Super Typhoon Haiyan in 2013. When local organizations supported by Development and Peace –Caritas Canada arrive to work alongside these communities, they are confronted by survivors who are dispossessed, living in tents, dependent on aid, and facing eviction from the land they have always known.

But what happens when you bring the people together? When they are given a voice and a chance to be heard? When they know how to take action?

Find out in After the Storm, as Development and Peace works with 550 families to transform a piece of land into new homes, a new community, and new lives for over 1300 survivors…

Advocacy – For the Love of Creation

Advocacy for global justice is something that the members of Development and Peace see as integral to their faith commitment. As humanity faces an unprecedented ecological crisis in the decade ahead, advocacy that cares for our common home is vital.

One of the Six Principles for a Just Recovery is building resilience to prevent future crises. Our common home has been facing a climate and environmental crisis for many decades now. Take a look at the For the Love of Creation initiative’s faithful climate conversations resources and organize a Zoom call with your family and friends to discuss the protection of our planet!

Women are on the frontlines of the pandemic, both because of its specific negative impacts on them and because they play vital roles in their families’ and communities’ response to it. Want to make a small gesture of solidarity with womankind? Our week’s theme is youth engagement. Consider writing to an inspiring young woman in your life 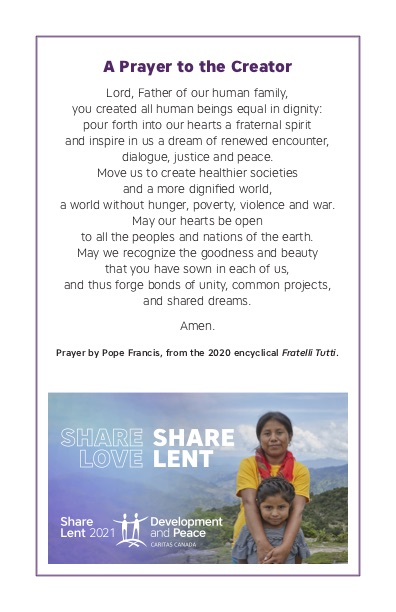