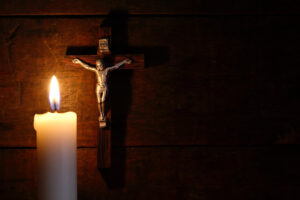 The crucifixion of Jesus is the ultimate sign of the covenant of God’s love for sinful humanity. The outpouring of his Precious Blood demonstrates how much God loves us!

St. Gregory the Theologian said, “Many indeed are the wondrous happenings of that time: God hanging from a Cross, the sun made dark, and again flaming out; for it was fitting that creation should mourn with its Creator. The temple veil rent, blood and water flowing from his side; the one-as-from-a-man, the other, as from-what-was-above-man; the earth was shaken, the rocks shattered because of (Christ the) Rock; the dead risen to bear witness of the final and universal resurrection of the dead, the happenings at the sepulchre, and after the sepulchre! Who can fittingly recount them? Yet not one of them can be compared to the miracle of my salvation. A few drops of blood renew the whole world, and do for all people what the rennet, (the curdled milk from the stomach of an unweaned calf) does for milk: joining us and binding us together.” (www.christdesert.org)

That’s the message of this Passion Sunday in a nut shell. It’s a message that keeps ever before our hearts, minds and souls, that were it not for Jesus crucifixion and the pouring out of his Precious Blood, that all of us would be steeped in our sins, and unable to find a way out by ourselves. It’s a message that also reminds us of our intricate interconnectedness with all of creation, which is also affected by the Lord’s passion and death on the cross! It brings a consciousness on our part that somewhere along the way, we humans have messed things up considerably for ourselves and our planet. We’ve wandered so far away from the image which God had for us, that we were stuck in the darkness and unable to light even the tiniest of lights.

Somewhere along the way, we humans had forgotten that our primary calling in life and the primary reason for which God brought us into existence is to love. To love means to look to the best interests and the well-being of the other. It means that we consider how we can pour out our lives in service to one another.

It means that we recognize its power to bring healing to a broken world and to work to restore creation to God’s grand design. Such love requires a great deal of prayer on our part to keep our lives centered in that God-given vision and to hear the voice of God who invites us continually to inner and outer transformation. Such love requires an open spirit and a willing heart to make ourselves vulnerable to the hurts and pains, the struggles and the limitations of other people, some of whom we may never even meet face-to-face. It necessitates a daily commitment to be receptive to the grace of God in every moment, especially when we’re confronted with various life challenges, such as this pandemic has proven to be.

The good news is that Jesus showed us how to live and develop this kind of love by his own suffering and death on the cross. His Precious Blood became the sign of the new and eternal covenant offered to all of humanity! He gave of his life until there was nothing left to give. He surrendered his will to his Father to the point of total, utter abandonment. He didn’t make excuses for the sin that was all around him either. He didn’t try to whitewash it away or sweep it under the rug. No, Jesus named it for what it was and called it out whenever he could. He didn’t shy away from confrontations with anyone or about anything which sought to maintain the status quo and to keep human beings steeped in their sin any longer. Jesus couldn’t look the other way, because that was his mission! He’d be faithful to proclaiming the Good News of the impending reign of God until the end. For he came to earth as the divine Son of God. He came to do what human beings couldn’t do for themselves. Jesus came to deliver us from sin and death and to pour out on humanity, a mercy unlike any other that they’d ever experienced, a mercy that would be limitless and which would be demonstrated by a dramatically tangible sign—the shedding of his Most Precious Blood on the cross.

Yes, Jesus knew that the only way to eradicate sin was to face it, head on. By enduring the scourges, the ridicule, the jeering of the crowds, the humiliation of nakedness, and the temptations to prove his divine son-ship, Jesus demonstrated the height, length, width and depth of the love he has for you and for me and the power of that divine love to redeem a fallen humanity, by relying, not on human strength, but on his human weakness—by accepting death on the cross as the ultimate way to forgive humankind of its sins and to restore the love, God had envisioned at humanity’s inception. Jesus’ merciful love for us feeble, sinful, and oftentimes fickle human beings, indeed frees us from our sins, and is the simple message which Jesus’ passion proclaims to all the world.

(Confirmation children message, Jesus died on the cross for my sins!)