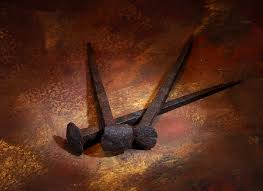 A young woman was begging for money on the streets of  Sudbury.  When she saw an elderly gentleman approach, she asked him, “Could you spare a toonie, for the Lord?”  The elderly gentleman asked her,  “How old are you, young lady?”  “I’m 22,” she replied.  “Well I’m 90 years old,” he answered, “and I’m certain that I’ll see the Lord before you will, so I’ll just hang on to my toonie and give it to the Lord myself!”

That man had no mercy on that 22 year old woman, who was in dire straits.   He failed to understand that by giving her a tooney, he’d be letting her see the love of the Lord, living and active in his life.  He failed to appreciate how blessed he was, to have lived so long and to even have a toonie to spare, in his pocket.

Fortunately for us Christians, one of the blessings we’ve all received, time and time again, from the Lord, is the gift of his mercy.   It’s  a gift that never ends and a gift that’s continually offered.  Our understanding of God’s divine mercy begins to be developed in the Old Testament, which uses three Hebrew words to describe and explore the many dynamics of mercy:  Those words are ‘hesed,’ ‘rahamim,’ and ‘hen.’

‘Hesed’ is used when referring to a mutual, dependable, and enduring kind of love, such as that found between spouses, between close friends, or between God and human beings.   This kind of mercy expresses an existing covenant bond and shows itself by actions which overlook or give another chance to a person that has trespassed against us.    ‘Hesed’ is expressed toward those with whom we’re in a long-term relationship and with whom we want to work through our failings, rather than give up on the relationship altogether.

This kind of mercy describes the compassion we feel for another from the center of our body or our gut.    ‘Rahamin’ harkens back to a time when we shared something in common— when whatever separates us now —didn’t exist.   When applied to God, ‘rahamin’ refers to the love our Heavenly Father had for us from the moment we were conceived in the mind of God!    Such a mercy seeks to have an effect on us by recalling to our minds our blessed origin in God, and furthermore, the new life with which we were blessed, in baptism.

The third Hebrew word for mercy used in the Bible is ‘hen.’  It refers to instances when a free gift is given by one person to another, with no obligation that the generous gift be reciprocated by the one receiving it.  Such a mercy depends solely on the generosity of the giver who may not be the equal of the one to whom the gift is given.

Our New Testament scriptures build upon these dynamic and  rich meanings of mercy and proclaim that God’s mercy is lasting and active, free and greater than anything human beings might expect!    Indeed, God’s mercy is a part of the very nature of being God, who seeks to give us flawed, frail, and sinful human beings, another chance at being faithful, dedicated, and humble enough to admit our failures and to overcome our sinfulness, which often gets in the way of our striving to become all that God wants us to be and to do, in His name.

God’s great act of mercy for sinful humanity began with the Father’s sending of his only begotten Son, Jesus, to our world.   Throughout his lifetime on earth, Jesus showed us, time and time again, what it means to have a merciful Father and what it means to be God’s adopted sons and daughters.   Such a tangible expression of divine mercy was indeed intended to motivate all of us, made in the image and likeness of God, to exercise this same sort of mercy toward one another.      When we fail to act with such mercy, we’re in danger of being judged on the basis of our lack of generosity and responsiveness to those who needed us to show mercy toward them.

In our Gospel for today,  Jesus has mercy on Thomas who wasn’t there when the Lord first appeared to his disciples.  He does this by appearing especially to Thomas to show him the evidence of the healed wounds in his hands and in his side!   But Thomas wasn’t the only one who needed God’s mercy.  All of Jesus’ disciples were in need of God’s mercy after his crucifixion and death.   Jesus could have rightly washed his hands of them all    —for  their abandonment of him when he was arrested and condemned .  —for their resistance to being identified as one of his closest followers as he hung upon the cross —-for their selfish motivations at times, in jockeying for a closer relationship to Christ than the others!   Jesus, overlooks all of their failures, though, because the Risen Son of God doesn’t want them to remain afraid or despondent any longer!  He doesn’t want them to think that worldly evil and sin have overwhelmed  God’s goodness, love, and grace!

No, Jesus wants them to be fully convinced that God’s Word is TRUE and that his promises are RELIABLE.    He wants them to be ENTHUSIASTIC LEADERS in telling others about the risen life which God, in his mercy, freely offers to all who have faith in him!  Jesus wants his disciples too, to find the PEACE OF MIND, HEART, AND SOUL, that will keep them focussed on the great and awesome task of kingdom-building that lies before them!     He wants them to TRUST in the covenant He entered into, with all of humanity, through his Most Precious Blood.

It’s that covenant in Jesus’ blood, which we remember and renew each time we celebrate Eucharist and which is the constant reminder to each of us, of the mercy that Christ wants us to emulate and embody!   Yes, it’s that covenant in Jesus’ blood which challenges us to live lives of mercy, without compromise, irrespective of the person or circumstances with which we are presented.

To assist us in living out our covenant with the Lord, the church has given us the  corporal and spiritual works of mercy, which enable others to SEE THE LORD living and acting in us and through us.

The corporal works of mercy invite us to feed the hungry, to give drink to the thirsty, to shelter the homeless, to clothe the naked, the visit the sick and imprisoned, and to bury the dead.  Broadly speaking, our Christian faith in God’s mercy impels us to share our material and financial goods, with those in our world, who have so little, or who are in distress and misery, in any way.    In fact, the Catechism of the Catholic Church identifies giving alms to the poor as the chief means whereby Christians come to express the sort of justice that’s pleasing to God.

The spiritual works of mercy, on the other hand,  acknowledge that, when all is said and done, the aim of every human life, is to grow in holiness and fidelity to God.  The spiritual works of mercy, then invite us to make this happen by providing instruction to the uniformed, to counsel the doubtful, to admonish sinners to turn back to the Lord, to bear wrongs patiently, to forgive the trespasses of others, to comfort the sorrowful, and to pray for the living and the dead.

When each of us commits to practicing these corporal and spiritual works of mercy, we’re allowing others to SEE THE LORD, risen and active in our world today!  We putting our pedal to the metal.  We’re practicing what we preach.  We’re living the sort of mercy God has freely and super-abundantly showered upon us, in so many ways!   We’re making the Good News relevant to peoples’ lives today!   We’re building connections with people who might never have known the love of the Lord made manifest in their lives!   We’re enabling others who’ve experienced mercy, to exclaim, as the others disciples had, to Thomas,  “We have seen the Lord!”   In short, we’re making real, the Divine Mercy which this second Sunday of Easter celebrates! 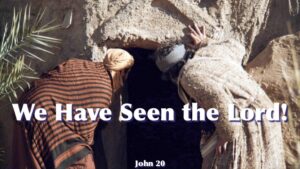