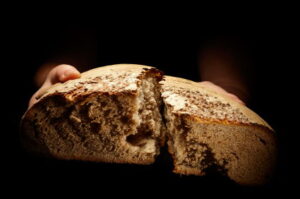 A driver in Sudbury is pulled over by a police officer.

The police officer approaches the driver’s door. “Is there a problem officer ?” asked the driver.

The police officer replied, “Sir, you were speeding 30 km above the speed limit.  Can I see your driver’s licence please?”
The driver responds, “I’d give it to you, but I don’t have one.”
You don’t have one?” asked the cop.
The man responds, “Nope.  I lost it for reckless driving.”
The officer is shocked. “I see. Well, can I see your vehicle insurance and registration please?”
“I’m sorry, I can’t do that either.”
The police officer says, “Why not?”
“Because I stole the car.”
The officer says, “You stole it?”
The man says, “Yes, plus I have an illegal firearm in the trunk.”
At this point the officer is getting worried. “You have a firearm in the trunk!?”
“Sure do.” replied the driver.
The Officer looks at the man, slowly backs away, and calls for back up. Within minutes, five police cars show up, with sirens and lights blazing, and surround the car.   A senior officer slowly approaches the car, clasping his half-drawn gun.
He says “Sir, could please you step out of your vehicle?!”
The man steps out and asks, “Is there a problem sir?”
“One of my officers told me that you’ve stolen this car and have an illegal firearm in the trunk. So, I’ll need you to open the trunk of your car!”
The man opens the trunk, revealing nothing but an empty trunk.
The officer says, “Is this your car sir?”
The man says “Why yes, it is, Officer,” and hands over the registration and insurance papers.
The officer, is quite stunned and replies. “Well one of my officers claims that you didn’t have a current driving licence.”
The man digs in his pocket, takes out his wallet, and hands it to the officer who opens it and discovers the man’s licence, in good standing.

The officer now looks quite puzzled and says  “Thank you, sir, for your cooperation.  The officer who pulled you over, told me that you didn’t have a licence or registration, and that you stole this car, and had an illegal firearm in its trunk.”

The man shook his head and replied, “I’ll bet you, that lying officer also told you, that I was speeding!” 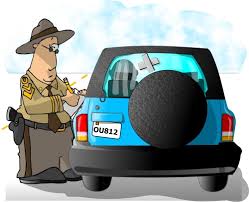 What a story that driver told, just to get out of a speeding ticket!   Lucky for him, the senior officer relied on what he saw himself, and not just on what the other officer had reported was the case.  We have that same ‘seeing-is-believing’ moment reported in today’s gospel, where the two disciples on the road to Emmaus went to report to the eleven disciples how they had come to see Jesus in the breaking of the Bread.  Despite their story, though, the eleven disciples had doubts in their hearts, until Jesus appears right there, before them,  in their midst!   He appears to them because he wants the Eleven to truly believe, beyond the shadow of a doubt, that it’s him, Risen from the dead, and not some apparition that they’re seeing.   That’s why Jesus says,  “Look at my hands and my feet; SEE that it is I myself.  Touch me and SEE, for a ghost does not have flesh and bones as you see that I have.”  (Lk 24:39)

While this event might have been enough to convince most of us, the disciples were a little resistant.    Even with this miraculous appearance, they still needed some convincing that it was Jesus!  But rather than giving up on them, Jesus instead takes the time to open their minds to understand how the messianic prophecies contained in the Law of Moses, the prophets, and the psalms, were fulfilled in all that happened to him.

And so, not only does Jesus’ physical appearance to the disciples testify that he is indeed the Messiah— the Risen Son of God— but so too, do the fulfilled messianic prophecies in the scriptures— which the disciples themselves had witnessed with their own eyes—- testify to the identity of the man, who sat before them eating a piece of broiled fish, as none other that Jesus Christ himself!

Like those first disciples, we’re being invited to SEE THE LORD among us, right now!   How, you may ask?  We’re being invited, each and every day,  to see the Lord, living and active in the scriptures.  We’re being encouraged to enter into the stories Jesus speaks,  to consider their application to our own daily living, and then, to take decisive action in making his words relevant to our world today.  We’re also being called to reflect on our commitment level, to being Christ’s followers and to assess whether we’ve really embraced and surrendered to the vision God has for our lives.    We’re being challenged by the Lord too, to recognize how his life of faith, in concert with the Father’s will and the Holy Spirit’s direction, led Jesus through his suffering and death to his ultimate resurrection.  As a consequence, we’re being prompted by those Holy Week events commemorated every year, to see that this same process of dying and rising is entered into, every time someone is baptized.

Living the life of faith in the Risen Lord, given to us at baptism, leads us most surely to the source and summit of the Christian life, which is the Holy Eucharist!  It indeed is rightly called the Most Blessed Sacrament because every time we break the bread and the cup,  we get to experience the risen Lord entering into our hearts, minds, and souls in a very mystical, intimate, and transformative way— unlike anything else the world has to offer or can comprehend.    This sacred, sacramental encounter with the Risen Lord is true, a sign to us that the Lord is no longer dead, that he’s risen from the tomb!  —that his promise of eternal life is true!

—that we have been gifted with the opportunity to encounter this Lord in an awesome, supernatural way, every time we receive holy communion!

If more and more people were made aware of the great grace and gift that God offers us each time we come together for mass,  no doubt our churches would be full to the brim each and every weekend!   If more and more people were made aware of the great desire that God has to be intimately involved in every facet of our lives, we wouldn’t hesitate to pour out our life struggles in that sacred chalice that is offered  up at every mass and allow God to take our brokenness and troubles and sins upon himself and transform them by his grace!    Part of our job, as persons who’ve experienced this joy of holy communion and encounter with the Lord, is to tell others about this great mystery and to share the wonders of this graced sacrament with everyone who will listen!   Part of our job as persons who have received the very Presence of the Lord into our bodies through bread and wine, is to take on the mindset of Christ whose very presence now pumps through every muscle, corpuscle and nerve within us!  Part of our job as persons who have seen the Lord is to identify, more and more, with the Risen Lord’s priorities and promises every day!   When we do all this, something awesome happens!   The very Eucharist we celebrate here,  pours forth and extends outside the walls of our church building and is given the power to penetrate every segment, crevice, and dark corner of society.  It’s only limited by where Christian believers are willing to go and what they’re willing to do, to enable others to see the Lord!   Are we ready to unleash the power of the Eucharist to those whom the Lord sends us, as his intentional missionary disciples?  Are we willing to be the unbridled force of God’s love in a sinful world?   In short, are we daring enough to allow others to see the Lord, made present in us through God’s Word and his Body and Blood?