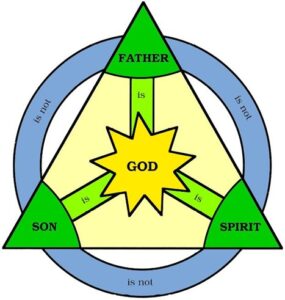 A priest, a doctor, and an engineer are out playing a round of golf on one bright, sunny day in Sudbury. Part way through their game, though, they realize that the group in front of them is taking forever to move on to the next hole.   Frustrated, they ask the groundskeeper what’s going on.

The groundskeeper replies,  “Well, I’m afraid the reason why they’re slow is that  the group is a trio of blind firefighters. You see, last month they were the ones who saved our clubhouse from a fire and, in so doing, lost their vision in the accident. To show our gratitude for their bravery and sacrifice, we let them play here for free whenever they like.”

The priest replies: “That’s great of you! I’ll be sure to say a prayer for them.”

“What a tragedy!” says the Doctor, “I’ll see if I can help them with their treatment.”

After a moment of reflection, the Engineer finally says, “For goodness sake, why can’t they just play at night?”

The Holy Trinity is a little like that, as well.  The Father, the Son, and the Holy Spirit each have their own distinctive ways of being and thinking and acting as God, but with one unique caveat!    Whenever one of them acts or wills or thinks something to be or to happen, the other two Persons in the Godhead also fully act in union with that divine Person, as well!   It’s kind of like a choreographed dance, where each of the members of the holy Trinity participate in and act in total union with each other, in never-ending, effusive joy, love, and freedom.

They can do this because they’re One God in three Divine Persons!   That’s the classic definition of the mystery that we call the Holy Trinity.   It’s a mystery to us, meaning that we’ll never ever be able to fully understand or put our heads around how God can be distinctly three Persons and yet, simultaneously also One God.  It’s a mystery that defies human logic and yet, we know it to be true because Jesus himself revealed it to be true in the scriptures.

Though never using the word –Trinity,– Jesus did continually call God, his Father and had an extremely close relationship to his Father.   In the Gospel of John 14:9, Jesus reveals that anyone who has seen him has seen the Father and in verse 11, he testifies that the Father is in him and he is in the Father because the Father and him are one.   He further reveals that he and the Father will send the Holy Spirit of Truth to guide the fledgling Christian community on earth and to help them to remember all that Jesus said to them, so that the Kingdom of God might spread all over the world.  In this way, the Holy Spirit became for human beings, the living, divine embodiment of the love of God the Father for the Son, and the Son for the Father, and together, they express the Holy Trinity’s love for us all.

That trinitarian love that God has for us is ever expansive.  It’s never satisfied with just being felt by the believers in Christ, right now.   No, it demands to be shared and poured out over all persons, everywhere.  It urges us to never be satisfied with the boundaries of the Kingdom of God, at this particular moment in time, either.   It rejects any excuses we may make that some group of people or some segment of society is not worthy of God’s love or to be a part of God’s reign.  No, it radically desires ALL of creation be a part of the Kingdom of God and that we labor for that kingdom until the New Creation is definitively made manifest by Christ at his second Coming.

That’s why, in today’s gospel, Jesus gives us that great commission, saying,  “All authority in heaven and on earth has been given to me.   Go, therefore, and make disciples of all nations, baptizing them in the name of the Father and of the Son and of the Holy Spirit, and teaching them to obey everything that I have commanded you. And remember, I am with you always, to the end of the age. (Mt 28:19)”

We can imagine this awesome mandate being boldly received by the disciples after Pentecost, more eagerly than it ever had been before, because now, the disciples had the power of the Holy Spirit energizing and innervating their every thought, word and deed.   Now their fear had been removed!  Now they knew the great promise of the Kingdom of God was true and that they were a part of it!  Now, they were convinced that their whole lives were meant to be of service to the Father, the Son and the Holy Spirit,  24/7.

Like those early disciples, we’ve also been given that same great commission by Jesus!  It’s a commission that will only end when the world comes to an end!    What that great commission reveals is that — we do what we do, and we accomplish what we accomplish—only by the authority of the Holy Trinity, who inspires and empowers us to do it, in the first place!   When we baptize, what we’re primarily doing is expressing the Holy Trinity’s love for sinners and God’s great desire to make, all of us, one in faith, hope and love!   And such a love from the Holy Trinity, when it’s truly and heartfully accepted, leads us, with each passing day, closer and closer to our final union with God in glory!

What we find too, is that, when we’ve experienced God’s gift of salvation ourselves, we can’t help, but want others to share in it, as well!    What’s more, by demonstrating our loving kindness, generosity, and respect for others and by daily committing to journeying with them in their personal struggles,  we, in effect, witness to our own faith, hope and love that’s been given to us by God and has the potential of attracting others to wanting that same faith, hope, and love in their own lives.   This is the primary way we evangelize others and invite all persons to join us as brothers and sisters in the kingdom of God!

While remaining true to the same divine mandate that Jesus gave us, the way in which we baptize has changed in practice over the centuries, as our theology of baptism has developed with the shift from adult to infant baptism and the societal shift from a predominantly Judeo-Christian culture to a postmodern, secular one.   Recognizing that shift,  and in order to be faithful to the commission to teach in the name of Christ, and to share the love of the Trinity with all persons, everywhere, the formation we provide for baptism must now primarily focus on a re-evangelization of the parents and the godparents of the baby.  So whereas, in the past, we could assume a certain fundamental knowledge of God, and identification with the church, and a clear understanding of God’s relationship to the rest of humanity, we can’t do so today.  Our modern-day efforts at evangelization need to provide opportunities for those who will support the one being baptized, to reflect on their notion of God, on what God expects of believers, on providing experiences of prayer and encounter with God as individuals and also as a worshipping community, and to provide an example of the church extending its care and concern for the less fortunate and the marginalized in the wider worldwide community.  –For when we evangelize in this way, in preparation for baptism, what we’re really doing is allowing every believer to enter into the mystery of the very life of our triune God and allowing them to experience this God, first-hand so that they too, may embrace God’s great commission!